A humane reaction is urgently needed at the Greek-Turkish border 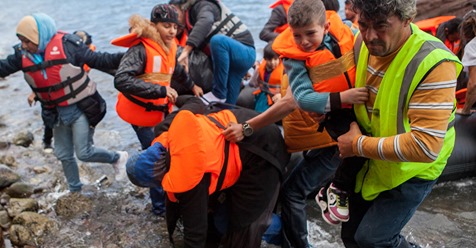 Migrants should not be seen as a security threat; they are individuals in a vulnerable situation who need our help. In response to the latest dramatic developments at the Greek-Turkish border, Caritas Europa calls for a united Europe of dignity and humanity to alleviate the suffering of the most vulnerable.

The appalling and desperate events of the past days at the border between Turkey and the EU demand a swift and humane reaction on the part of the upcoming extraordinary Justice and Home Affairs Council and the EU Foreign Affairs meetings. Consequently, Caritas Europa calls on the EU and its Member States to urgently find a humane and dignified solution to the dramatic humanitarian situation that is now unfolding at Greece’s external border, both on the islands and in the mainland, after Turkey opened its external border towards the EU.

‘People trying to reach Europe in search of protection should be treated with dignity and respect, and never be greeted with tear gas, guns or hatred. Europe must champion values like humanity and solidarity, which are at the core of the founding of the EU’ – Maria Nyman, Secretary General of Caritas Europa.

Focusing exclusively on border controls results in the criminalisation of people on the move and fuels irrational panic. The EU and its Member States must come up with a strong collective plan to provide humanitarian support for the thousands of people, including families, women and children, who have fled wars, persecution and hunger and who are now stuck at the EU’s external border.

We cannot accept children dying when trying to reach the safety of the EU. And we cannot watch passively when our coast guards attack and push back migrants on-board a dinghy in difficulty, trying to reach dry land, as has happened in Greece this week. In the words of Pope Francis, we must tackle the ‘globalisation of indifference’. Europe must own up to its responsibilities and founding values.

In addition, Europe must show solidarity towards Greece and asylum seekers left in limbo, especially on the Greek islands. EU States should urgently relocate asylum seekers, starting with the most vulnerable, such as unaccompanied minors. We are reiterating this call with 64 other European civil society organisations, which further stresses the urgency of the inhumane situation.

According to UNHCR, 40,000 migrants are cramped in official camps on the Greek islands, which are designed to accommodate only 6,000 people. Thousands more are living in makeshift camps without any access to services or healthcare. Frustration is rising among the migrant population left in limbo and the islanders who feel abandoned by the Greek authorities and the rest of Europe. This has led to several demonstrations, increased tensions, violence and racism towards migrants. An increasingly toxic atmosphere towards NGOs and volunteers supporting migrants has also led to several attacks.

Similarly to UNHCR, Caritas urges all parties to refrain from using violence against migrants and the NGOs rescuing and supporting them. We strongly condemn the restrictions applied to accessing asylum and refoulement that are taking place in Greece and along the Turkish border.

Acknowledging that the current situation is connected to the humanitarian crisis in Syria and the neighbouring countries, it is all the more imperative that the EU does not turn a blind eye; instead, it should step up its diplomatic efforts to broker an end to the war in Syria and provide humanitarian support to the newly displaced persons in the region of Idlib. Let us not forget that over 12 million people have been displaced by repression and violence in Syria since 2011. It is high time that these people receive some humanity and peace.

As the EU-Turkey deal is about to reach its 4-year ‘anniversary’ on 18 March, these dramatic events confirm that this deal is not – nor ever was – a sustainable measure to respond to the increasing number of people in need of protection. The EU and its Member States cannot keep on externalising their asylum and migration policies to neighbouring countries like Turkey or Libya. Instead, they should design humane policies that are anchored in EU values, such as solidarity and responsibility sharing, and that fully comply with fundamental rights. Let us learn from our mistakes of failing to devise sustainable solutions to human mobility and recognise the need to implement long-term, comprehensive policies that address the drivers of forced migration.

Let us Welcome, Protect, Promote and Integrate Migrants and Refugees