Everyone brings own uniqueness 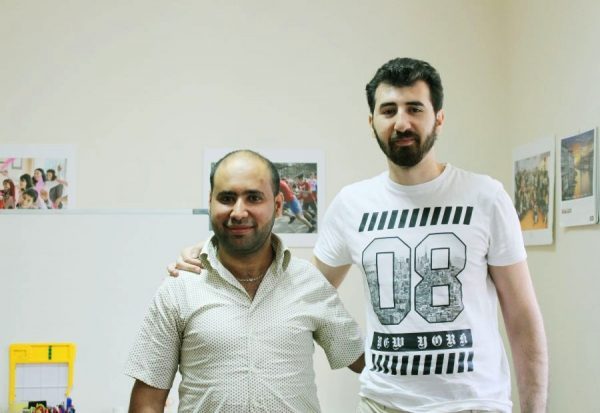 “My name is Ahmed and I come from Iraq. I first came to Bulgaria 8 years ago”. This is the beginning of the story told by a participant in the Mentoring Program of Caritas Sofia. The program helps promote the communication of people under international protection with the local population. It connects people from different cultures by helping them realize their dreams, spanning a bridge between their worlds, hopes and desires enabling them to show off their best, while erasing the imaginary barriers of prejudice and fears.

The war in Ahmed’s homeland has forced him to seek security and employment in his professional background in Europe. Ahmed has a Bachelor’s degree in Business Management and Nikola, his Bulgarian mentor, graduated in Finance in the UK. In addition to their common interests in the field of economy, they share common interests in their experience of traveling and residing in Western Europe. For a few months, Ahmed and Nikola have met regularly and exchanged experience, mutually useful ideas and got to know each other’s cultures. For Ahmed, it brought a great benefit – his most intense lessons in Bulgarian language are precisely these talks with Nikola.

Ahmed has versatile interests and skills. From crafting a traditional Arabic loaf of bread to studying the subtleties of digital marketing and Bitcoin electronic payments – he can surprise everyone with his professional background. His overwhelming smile shows that he won’t stand back for a moment and is always ready to face new challenges.

Having received a refugee status in Bulgaria in 2009, he had only two weeks to leave the center with the State Agency for Refugees where he had accommodation and had to search for home and work on his own. At the time, he did not know Bulgarian well, he knew no one and Sofia was unknown to him. Being homeless and unemployed, Ahmed realized that in order to cope with the difficulties he had to first learn the local language. So he discovered Caritas.

In this organization he found the help he needed. He is respectful and grateful to Caritas Sofia employees who lent him a helping hand, sent him to see a doctor for his disease, offered him free courses in Bulgarian language and enrolled him in the Mentoring Program. It was also the beginning of the positive change in his life.

He see as a disadvantage the lack of a good integration program in Bulgaria. He gives an example with Sweden, where every refugee receives own integration card – it provides for subsistence funds, but also enables the cardholder to register his/her attendance at compulsory Swedish language courses. If a lesson is not attended, authorities immediately know this fact and make an immediate check. The state wants to ensure that the person enjoying assistance makes his or her best to integrate into the society, learn the language and find a job on their own.

Despite his personal assurance that Sweden has a better integration program, Ahmed is convinced that Bulgaria is a better place to live. He thinks that there is a huge potential for developing a private business in Bulgaria, despite the inevitable difficulties along this path facing anyone starting up their own business. After his encounter with Caritas, Ahmed is again hopeful that he is able to reboot his life. He is not a man to give up easily. A few months ago he met for the first time his mentor, who quickly became one of his good friends in Bulgaria.

Nikola heard about the Mentoring Program from a social networking friend. He was curious about the refugees matter. He is not a man who would borrow others’ opinion as his own, as many do when it comes to asylum seekers in Bulgaria. From the very first moment he realized the responsibility he was taking. This is a mission demanding to spend as much time as necessary to a person who needs care and attention.

Nikola started his volunteer assignment without any prejudice and ever since he has not changed his mind. He believes refugees are people like everyone else – anyone can find something in common with them. “At the same time, everyone is different. I like looking at people as personalities, not as part of a herd or different groups – ethnic, religious, etc. Everyone brings own uniqueness. I graduated in Finance and Ahmed is a graduate in Business Management. Just like him, I am interested in stock markets, the new cryptocurrencies. I have no experience but I share an interest and Ahmed tells me about his work. We have a lot of things in common,” Nicola says.

He says his relatives were amazed at his new activity but supported him. They believe negative stereotypes against refugees are the result of the country’s outdated educational system and the Bulgarians’ generally negative attitude towards almost everything. For Nikola, the key is hidden in the approach.

“I think there should be more private initiative. When the state intervenes, it often makes it ineffective. Ahmed mentioned about Sweden and the fact that the state cashes in big taxes, but then allocates funds to refugees and vulnerable groups. I prefer another approach. It would be a better strategy if Bulgarian citizens have higher income and realize by themselves they can help and lend a helping hand. So it will break down stereotypes and they will have the choice to give money for a cause they believe in. Otherwise, we have poorer and less educated people who feel that the state is taking their money and reallocating it to refugees or other groups. It only feeds hatred, deepens the problem, instead of solving it,” Nikola says.

The Caritas Mentoring Program gives hope that we will see a rising number of people willing to live in mutual understanding, share their happiness and help people seeking protection, as well as anyone in need, by giving them a chance for a new life.