Life on the periphery 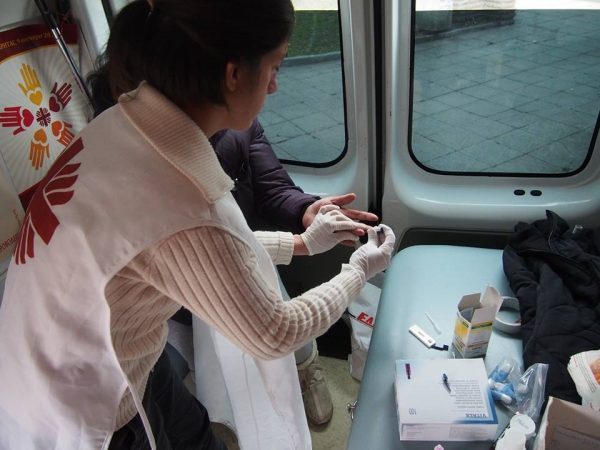 They are rarely mentioned. They almost never hit the headlines, unless it is the “top thread” of the criminal chronicle. They are usually spoken of in a third person except when, for evil misfortunes, they are not part of the family. Then it really hurts for them – these mostly young people who have lost meaning of their lives have become entangled in the drug chains. They are drug addicts. Doomed to life on the periphery.

The periphery around which the State has placed invisible barriers through the lack of working laws and interaction between the institutions. The result is: THEY – drug addicts who die much more often due to lack of help for treatment of various gangrenes, for example, because 99% of them have no health insurance than from overdose.

In order to help these people, since 1999, Sofia has a Mobile Center for Field Work at Caritas Sofia. Assistants at the center visit locations where drug addicts usually got together and provide them with primary care, anonymous tests on blood-borne infections, counseling on options and treatments, counseling parents and addicted friends. A total of 2283 visits were recorded through the mobile office in 2015, including 1757 men and 526 women. The cases of people under 18 who used the mobile office services are 93.

The team of the Mobile Cabinet consists of four people: Vladimir Dimitrov – Social Worker and Team Leader, Tanya Bencheva – Nurse, Dimitrina Markova – Psychologist, and Milcho Ivanov – a driver who is also a former paramedic. The four have experienced the torments of hundreds of destinies. When we talk to them about the drug addicts, their eyes are filling with tears, and their pain is shining in their tears, and also their empathy for the pain of others, and also the firm belief that they give hope and motivation to life to some people, not just “sick”, but those who have lost the meaning in life. And this is so natural because Caritas is always there – on the periphery of the world where hope and meaning first escaped from misery and lack of prospects.

Most of the people cared for by the Caritas Sofia Mobile Care Center are the poor, extremely social, severely somatic, use psychoactive substances, most of them more than once, some combine drugs with alcohol. Many of them are treated in methadone programs. Others do not resort to treatment at all. There are a large number of people who are representatives of minority groups. Most are in the age range of 25-45 years, but there are representatives under the age of 18. The team has helped children aged 10-11 years who have been and are still in a very difficult situation – abandoned by their parents living on the street, using more than one drug. Although rarely, but among the addicts there are people over 60 years old.

Vladimir, the team leader, tells us one of, unfortunately, not the rare cases of their day-to-day work: “Maria is 20 years old. She was born in one of the poorest neighborhoods on the outskirts of Sofia. She has 5 brothers and sisters. She hardly knows her father. For a long time, she has lived with her mother in a house made from handy materials. She started using psychoactive substances as early as 10 years old. Initially, she breathed glue. She tried almost all types of street drugs. Most commonly she uses heroin, intravenously. She has been treated for about 3 years on a methadone program. At the end of last year, her mother died, and Maria lives on the street with one of her younger brothers. She was sleeping in abandoned houses or under bridges. In the winter we helped her to be accommodated in a temporary facility for the maximum possible period of 3 months. Then she returned to the street again. Due to many somatic diseases, she needs specialized medical intervention. We do our best to get the right treatment to her.”

Asked the question “What are the institutions expecting to do for drug addicts?” Mobile Center employees respond more emotionally: “The trouble is that their care must be complex and must be coordinated between all institutions and organizations that deal with them. For example, detoxed boys and girls come from the Suhodol hospital, but then there are no programs that are free to socialize and rehabilitate addictions. It is about being trained how to look for a job, how to behave in an interview, to specialize in some activity. Things like these are important because these people have been social outcasts for years and have lived only in their drug addicts’ environment. After Suhodol, they try to find employment, but they usually fail and remain socially isolated, which brings them back to the community they know well, and the recidivism is present,” says Dimitrin.

Dimitrina has been working in the Mobile Center for Caritas Sofia for 10 years now. As a psychologist, her job is to talk to addicts about the problem everyone has. She supports the decision-making process, the search for ways to address the issue, possibly by looking together, and the personality attributes of the addict that would help or hinder it in achieving the goal. And the goal everyone puts for himself.

For the people she meets daily, she says, “These are human destinies. Each of them can’t but make you empathic, sweep you, and make you give it all by yourself. To make people understand that at least they are not alone, that there is someone who understands them, someone who supports them, someone who is willing to lend them a hand. In many cases their own families, unfortunately, are gone. They either ignore them because of the problem, or have long abandoned them for other reasons. There are occasions when they are together, but they just physically live in one place without communicating with each other.”

For each of the four Mobile Office members, working at Caritas it is not just a fixed-time job. Tanya Bencheva, the medical assistant, says: “My work is related to medical care – I take blood, treat and bandage wounds, abscesses. As long as I do all this, I experience the story of a person and express my attitude with a smile, a look, a feeling so that he can feel my support. There are days when a person’s story is pinned in my heart and in the evening, when I go home, I think over it and hope everything is okay. For me, a good day is when, after I go home, my heart is still at work.”

Staying homeless I owe my life to Caritas