Warmth and affection are healing 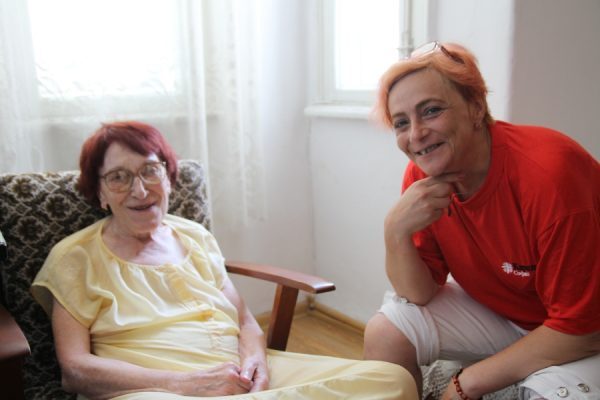 Anastasia is at the age of 89 years. She was born in Plovdiv, but has lived in Sofia for more than thirty years. After her husband’s death, in 2009 she returned to her hometown. At the time she was eighty years old. Since then, illnesses followed one after another.

Anastasia says about herself that she is a person of both emotional and physical stamina, but now, when she is already eighty-nine-years old, she has lost her desire to fight. She has no children, no living relatives, except for a brother who lives in the United States for over 50 years, and a cousin. Her brother comes back to Bulgaria twice a year and always visits her. Her cousin comes to see her from time to time and helps her as much as possible.

Galya and Geri – the nurse and the social care assistant at the Caritas Home Care Center in Plovdiv – have been taking care after Anastasia for about a year. The elderly woman says that after falling ill with a virus, her physical condition dramatically worsened. Then, for the first time, she thought over the idea of having someone to take care after her. But it is namely loneliness that motivated her first steps in seeking assistance.

“The worst thing for me was when, after my husband and my friends passed away, I had to learn to live all alone. It was extremely difficult for me”, Anastasia says. In that period, she suffered from depression. She was trying to get apace with the new rhythm of life, but in 2016 her last friend passed away. “Loneliness is a very scary thing, I wish that no one experiences it”, Anastasia adds.

The elderly woman is happy with the care she receives from Galya and Geri. The days they visit her at home turn into an enlivening oasis in the infinite lack of color in everyday life. Bright moments when loneliness fades away.

“I’m aware of the severe cases they face every day”, says Anastasia, adding, with a regretful face, she would enjoy more time to communicate with them, but she knows they are quite busy and that’s why she does not feel comfortable to express too much whims.

Asked whether she had ever used the service of other social care other than Caritas, the elderly woman responds negatively. Until her eighties, she only had a woman assisting her in cleaning windows, but she was strong enough and had a desire to live. She was physically and emotionally broken in the last four years only and relies heavily on Caritas and the care they provide – both for her health and emotional state.

In translation from Greek, the name Anastasia means “revived”, “back to life”. We wish her that the care of Galya and Geri – Caritas’ nurse and the social worker – would really revive her to the extent that she continues having a comfortable and dignified life. In reply, the elderly woman adds: “How long a person lives – this is God’s job. We do not know that, but we know that warmth and affection mean a lot, and they can give the meaning even to a very sick person who is close to the end of his life.”

Do to others as you would have them do to you