2018 Europe’s youth between hope and despair 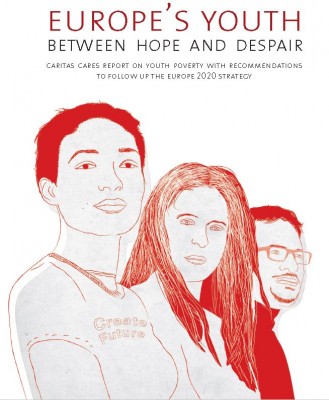 „Europe’s youth between hope and despair“ is a report on youth poverty in Europe. The report is based on the research of 16 Caritas organizations including Caritas Bulgaria. It presents the situation with young people in 16 EU Member States.

The findings of Caritas’ survey confirm the increasing situation of precariousness that Europe’s youth is facing. The tools and opportunities accessible for young people to live a dignified life are not the same across Member States. The young people behind the statistics, their parents and, in many cases, their children are suffering from structural obstacles that condemn them to remain in a vicious circle of social exclusion and deprivation.

With this report, Caritas Europa coins a new profile of young working-poors, the SINKIES: Single Income, No Kids. This term refers to young couples without children who are both working-poor and barely earn the equivalent of a single income when their wages are combined. SINKIES, as opposed to DINKIES, a term coined in the 1980s to describe couples earning a double income who chose to be childless, SINKIES might wish to have children but simply can’t afford it.

Caritas’ research looks into how young people at risk of poverty have limited access to rights, such as housing, work and education. It also looks at other issues of concern for Europe’s youth, such as intergenerational transmission of poverty, stigmatisation, marketisation and the commodification of youth. In addition, in the research, Caritas analyses the effectiveness of policies currently in place at national level, as well as European initiatives, such as the European Youth Employment Strategy and the European Pillar of Social Rights. Finally, the research also includes a series of recommendations to the European Union and its Member States.

The report can be read here.